Rodney Brody’s life changes when he takes his family on 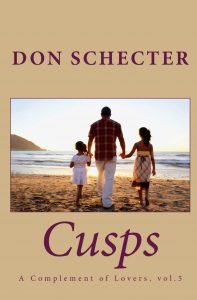 While  exploring the unfamiliar dynamics of gay sex, Rodney must thread a careful path. When he chooses to come out to those closest to his heart, three lives on cusps of major change must join together in support.

Cusps is 5th in a series. Each novel is complete in itself and makes for enjoyable reading, but for those who wish to delve into the origins of things at this point in the story, the entire series provides a continuous narrative.

As they grow, and as their children grow, Rodney and Meg adapt to changes they initiate, as well as changes that take them by surprise.

Click buttons below to purchase Cusps in softcover or any e-format: